With the grace of Allah, more and more people are seeking the guidance of Sultan ul Ashiqeen to enrich their souls with the Mohammadan heritage of Faqr. Hence, khanqah of Sarwari Qadri Order was in dire need of more space to allocate people. Consequently, Tehreek Dawat e Faqr took the initiative of setting up khanqah of Sultan ul Ashiqeen under the supervision of Sultan ul Ashiqeen. Alongside, the idea of a grand mosque was also discussed. On the Friday of 1st December 2017 (12th Rabi ul Awwal 1437 H), Sultan ul Ashiqeen Sultan Mohammad Najib ur Rehman announced this khanqah and masjid project on the sacred occasion of Mawlid of Prophet Mohammad pbuh. The khanqah to be named as Khanqah Sultan ul Ashiqeen and the the masjid to be titled as Masjid al-Zahra.

Soon after, under the supervision and permission of Sultan ul Ashiqeen Sultan Mohammad Najib ur Rehman, Tehreek Dawat e Faqr began the planning, structure and set up of khanqah and masjid.
The requirements were taken into consideration. The most important ones being the mosque itself where prayers and contemplation of Ism e Allah Zaat can be done. Then a Quran gallery would be created whereby a collection of Quran, Hadith and literature of Islamic Sufism would be kept for all to read and understand. Moreover, the place would also serve as the resting place for the Shaikh of Sarwari Qadri Order Sultan ul Ashiqeen so his devotees can benefit from his shrine.
The khanqah is to cater to all departments of Tehreek Dawat e Faqr. Each department would be allocated a separate area for smooth running of work such as publications, digital productions, IT department, Islamic research and development, etc.
Apart from that Sufi lodges would be built for devotees coming from far off areas as well as those who have permanently dedicated to serve to the khanqah. Moreover, a grand kitchen would be set up for the daily preparations of langar i.e. food for visitors.
Furthermore, a hospital for first aid and general care would be built for all the visitors alike.
Also, grand halls would be built to commemorate events from weekly Mawlid to annual events such as Urs and Moharram, etc.

he project is grand and requires a huge amount of money for its completion. We humbly request to contribute for this noble cause whose intention is the spread of true teachings of Islam.
Undoubtedly, the magnitude of reward in return of such contribution would be unimaginable. This khanqah and masjid would continue to spread the fragrance of Faqr till the day of judgement. Hence, the beneficence of reward of all contributions and donations, sadaqahs and zakat would be given not only in this life but afterlife as well.
Moreover, the added spiritual benefit is that Sultan ul Ashiqeen Sultan Mohammad Najib ur Rehman specifically prays for every individual who contributes in this sacred project and the blessing of the perfect spiritual guide would is the most precious treasure.

You can money order us on the address of central office of Tehreek Dawat-e-Faqr given below;

Every Sunday, you can also present your donations directly to Sultan-ul-Ashiqeen Sultan Mohammad Najib-ur-Rehman.

We would be highly obliged. 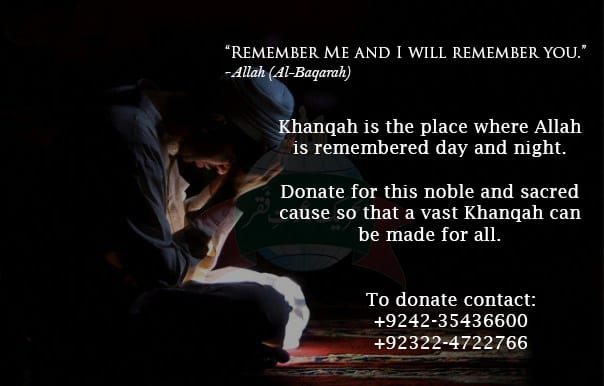 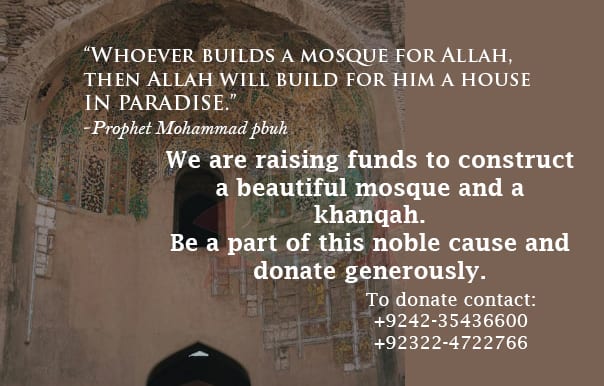